I recently made a post comparing the specs of the A10 based MK802 to the RaspBerry Pi. For those who are unaware the MK802 is a low cost, Android based media PC you can pick up on Amazon for less than 40 USD. A little over a month ago I replaced my desktop sized media computer with an MK802 - today I would like to share with you my thoughts on the device.

The MK802 is a little bit larger than a flash drive and the package includes a power adapter, HDMI mini to HDMI cable, a user manual and a few USB cables: 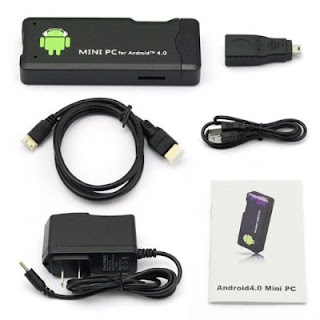 Now, the MK802 has only a single USB port, which means unless you have a keyboard/mouse combination you are going to want to be sure to pick up a USB hub to go with this device so you can attach multiple peripherals to it.

I have read reviews that said this little device is prone to over heating - I do not believe such reviews. I've left my MK802 powered on for over a week straight and playing hours of video in a single sitting without issues. It is a little trooper.

The Software:
The default operating system that comes with the MK802 is a fairly stock version of Android 4.0. So much in fact that it is very clearly designed for a tablet computer - not a media center PC. Still, the GUI functions well enough with a USB keyboard/mouse and with a few minor tweaks it is near perfect.

The first thing I did on the device was disable the on-screen keyboard. It seemed terribly silly to have a giant keyboard take up half my TV screen every time I clicked into a text box. This issue is quickly solved by installing and configuring the Null Keyboard application from the Play Store.

Speaking of the Play Store, I've installed several applications from there and most of them have worked fine - however not all of them. For example Google's Chrome for Android does not support the device.

One nice thing about the device is that the version of Android on it is rooted by default and the device knows what to do with an APK file when you click on it in the file manager.

In terms of speed the MK802 isn't going to win and records. The 1.5ghz single core processor runs most applications fast enough, but there is a noticeable speed reduction when using multiple applications on the device simultaneously. If you are interested in the full specs of the device I would direct you to my post here.

Wrapping Up:
Over all I've been very happy with my purchase of the MK802. It has aptly replaced my media PC at a low cost, while using much less power. I would highly recommend this device to anyone looking for a cost effective media PC device.

As an aside I haven't been successful in booting an alternative operating system on the device - but I'm not giving up yet. Bodhi Linux will be booting on this thing before the end of the user.