Its been two months since we had our alpha release and since then Ubuntu 14.04 has released as "stable". That means the core for our upcoming Bodhi 3.0.0 release is finally stable enough for me to stamp a "beta" label onto it. For those that do not really care what I have to say and just want a download link, this beta release comes in the following three flavors:
Those looking for a change log / my TODO list for 3.0.0 please see here. All of these images are built directly on top of the latest Ubuntu 14.04 packages. The 32bit and 64bit images utilize the 3.13 Linux kernel, while the Chromebook image utilizes a 3.11 kernel due to hardware compatibility issues.

The Chromebook image is tested/designed to work with the Acer C720 and HP 14" Chromebooks. It could very well work with other Chromebooks, but they have not been tested. For more information on installing Bodhi on your Chromebook follow the directions here.

Some folks made note that when I first posted the Bodhi 3.0.0 release schedule we were set for a stable release at the end of June. After some discussion on our user forums it was decided that we would all be more comfortable with waiting till after Ubuntu releases their first major update to 14.04 before we called 3.0.0 our "stable" Bodhi release. With this in mind the Bodhi 3.0.0 stable release has been moved from a June 27th target date to a August 2nd target date. This makes our release cycle heading towards 3.0.0 stable look like:
New Look and Applications

While I a linked a change log above, a picture is worth a thousand words as they say! Below is pictured the new Radiance Enlightenment theme that is nearing completion (Thanks Duma!) which is now the default look for Bodhi 3.0.0. Also shown in the screenshot is ePad text editor (replaces Leafpad) and eepDater system updater.

As always please, please, please do not post issues in a comment on this post. Instead open a thread in the 3.0.0 testing section of our user forums. Also keep in mind this is a testing release not intended for production machines.

Happy Testing,
~Jeff Hoogland
Posted by Unknown at 1:41 AM 31 comments:

I recently picked up a Chromecast and one of the things I was looking for was to stream Twitch.tv from my laptop to my TV using the device. Thankfully setting this setup is fairly simple thanks to the aide of the TCast Chrome plugin.

Streaming to the Chromecast from your PC currently requires a Chrome based browser. Install either Google Chrome or Chromium.

Select each of the addon links below and add them to your browser:

Step 2 - Enable Streaming from your Channel of Choice

Open the twitch.tv stream URL you want to cast to your Chromecast. Play your stream and then click the Chromecast button underneath the video player. You will then see the following appear over your stream: 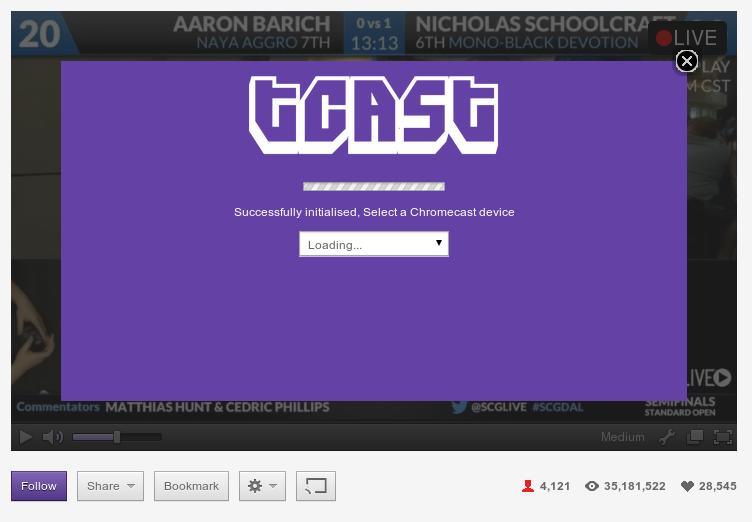 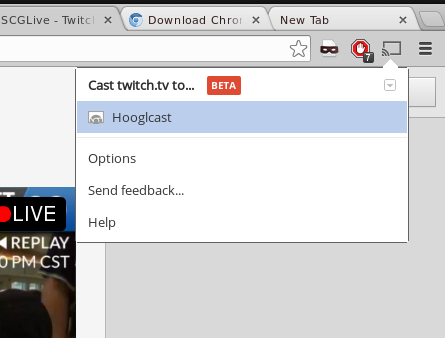 Your Chromecast should then take a minute to load up the stream and then it should soon be playing! In your browser page you will then see the following screen from which you can adjust the stream quality and play/pause the stream: 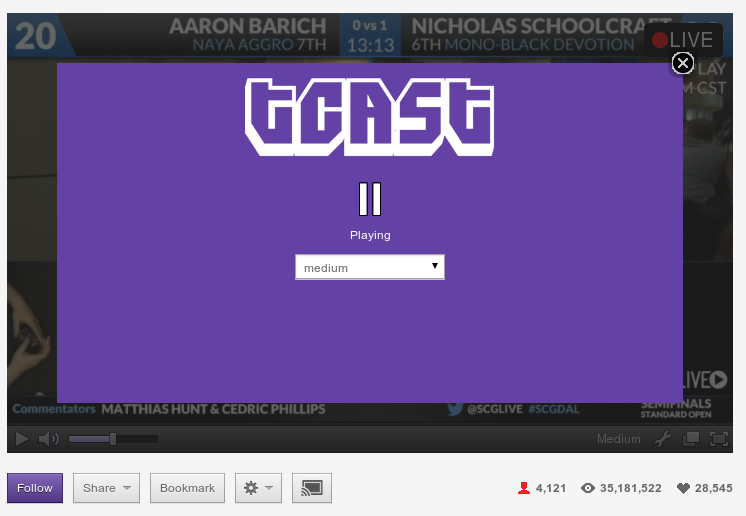 And you are all set - enjoy streaming twitch on your Chromecast device! Have any questions or issues please feel free to leave a comment below and I'll do my best to help.

I've only tested the above instructions on my Linux based PC, but these extensions should work on any platform that supports Chrome/Chromium.