Edit/Update: You can find the latest release here -> http://www.bodhilinux.com/downloads_mobile.php

A little over six weeks ago I posted a very early image of Bodhi for the RaspBerry Pi. Today I am happy to let everyone know that I have published what I consider to be a "beta" quality image:

The download comes in the form of a compressed .IMG file, which can be extracted and then written to an SD card (2GB minimum). The first thing worth noting in this release is that the default username/password are different:

As for changes, this release is now utilizing Terminology as it's default terminal emulator and PCManFM file browser has been replaced with the native EFM (Enlightenment File Manager). The issues our first image had with networking and flash drives should also be resolved with this release. Also worth noting is that the AppCenter is now configured to work by default in the Midori web browser - but the synaptic interface runs fairly slow on the Pi hardware.

Finally - if you have any issues with this image please open a support request in the RaspBerry Pi section of our user forums. That is a much better place to trouble shoot than the comments section on this post.

HOWTO: Create and use .IMG files from the CLI

Now that Bodhi's second stable release for the desktop is settling down, I am going to be putting a bit of focus on our ARM releases for the next couple of weeks. ARM images typically are provided in the form of .IMG files. Using a downloaded .IMG file is fairly simple. You can write it to a drive of your choice with a single command:

One thing worth noting though is that /path/to/drive should not include any partition number. An example path would be something like:

Note that writing large images can take a good deal of time depending on the speed of your drive and that this command will not give you any feedback until it finishes.

Now, perhaps you are like myself and have some interest in creating/distributing .IMG files of your own. Creating image files is also fairly easily and uses the same dd command. An example of how to create an image file is:

Note that this command copies the entire contents of the drive - meaning if your drive is large your .IMG file will be equally large! Now, what do you do if you only want to copy part of your drive? Simply add one argument to the above command of course! For example to only copy the first two gigs of data on a drive to a .IMG file use:

I am by no means an expert at using dd, but if you run into any issues feel free to drop a comment below and I'll do my best to help you out.

Some of you might be slightly confused by this posting since our 2.0.0 release was published just five days ago. No piece of software is perfect and our 2.0.0 release is no exception to this. Since we released last Thursday our 2.0.0 discs have received over 15,000 downloads - a number the Bodhi team and I are extremely happy with. With this large influx of users we have received a piles of user feedback and bug reports - some of which need to be dealt with right away (not two months from now when our next scheduled update release is set to come out).

With this in mind I would like to cut straight to the point and give you the disc downloads for 2.0.1 (as always torrent is fastest):

What was so pressing you ask that demanded we release bug fix ISO images now instead of waiting for our normal scheduled release? Well a few things:

Users that have already installed our 2.0.0 release (or alphas) and are keeping up to date with their software updates via the package manager will already be at our 2.0.1 release:

No need to reinstall for minor/bug fix releases - but I would encourage you to grab this latest ISO image for use with your live media.

Cheers,
~Jeff Hoogland
Posted by Unknown at 8:49 AM 23 comments:

Well boys and girls the wait is finally over. After two months in the making 2.0.0 is officially our stable release. This build features the stable Linux 3.2 kernel, PCManFM file manager, the latest version of the Midori browser:

Bodhi 2.0.0 is our first stable release to be offered in both 32 and 64bit flavors. Please note the torrent download is much faster than the direct download:


The Bodhi team and I would like to extend our thanks to everyone who made this release possible. Most notably the E17 team and our community of testers!

If you encounter an issue with this release I would please implore you to first check your download md5sum. If your download is fine I would then ask that you request help on our user forums - not in the comments section of this blog post.

A little over six weeks ago I posted about the first Bodhi Linux 2.0.0 public image. We have had three other builds release since then and today I would like to announce the availability of build 5 for download. I am stamping this build as our "release candidate" meaning that is is a stable working environment and something extremely close to this release will become our "stable"/final 2.0.0 release by the end of this month.

What is missing from this release still? Of note our AppCenter is still in the process of being transitioned over to work fully with this new release. Meaning a few of the packages there might not be found yet in the 2.0.0 repositories. If you do find an application there that doesn't install properly I encourage you to let us know on our user forums. Also worth noting is that none of the current .BOD files obtained via the "Download" buttons are functional with 2.0.0 and they should not under any circumstance be installed on a 2.0.0 system. There will be an announcement posted here when they are ready.

Finally - you can find the 32/64bit disc images for download via source forge here.

Since Bodhi Linux includes GTK applications by default, you will find they have a fairly neutral tone that blends fairly well with the rest of the system. Beyond this Enlightenment has a built in tool for changing the look of GTK applications.

What is a person to do though when they install VLC or some other QT application for the first time and it looks like this: 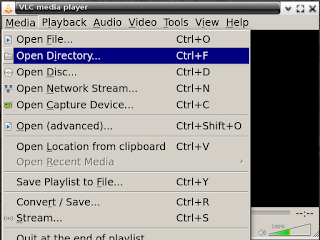 First off - don't panic! It is a fairly simple/quick fix to get your QT applications to blend in with the rest of your desktop. You first simply need to install the QT theme manager - on Debian based systems such as Bodhi this can be done from the command line via:

Once this package is installed a new option should appear in your menu under "Preferences" labeled "Qt 4 Settings". Launching this will present you with a window the looks something like this: 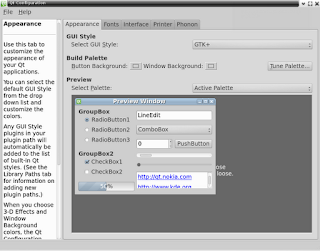 Only your "GUI Style" will be something other "GTK+" by default. To change this simply select "GTK+" from the drop down menu and then close the settings manager.

You should now be all set with nicer looking QT applications: 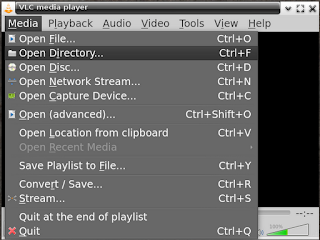 E17 heading towards a Stable Release - No Really!

I've been pushing the Enlightenment desktop for some time now and for as long as I've been promoting it I've also been warning folks that it is under heavy development. Well folks - Duke Nuke'em Forever might have beat them to a release, but E team is prepping for a major (stable!) release themselves.

The E release manager has setup a wordpress you can find here to follow more specific details about the upcoming release. What can you do to help out with getting E17 on the road to release as a end user? Why filing bug reports of course! One thing worth noting is that if you are filing bug reports you should be keeping as close the latest SVN version as possible.

Finally - if it has been awhile since you've tried the Enlightenment desktop now is the perfect time! If you aren't inclined to be compiling software from source Bodhi Linux provides one of the best default implementations of E17 around. Arch Linux and Gentoo also provide fairly current builds of E17 in their community supported repositories.

~Jeff Hoogland
Posted by Unknown at 9:29 AM 7 comments:

I'd like to take a moment to share a few wonderful videos one of the Bodhi team members has taken the time to put together. This first is a short sound byte/advertisement for our upcoming 2.0.0 release:


These next two show case the winners of our Desktop of the Week contest:

~Jeff Hoogland
Posted by Unknown at 9:00 AM 3 comments:

The company I am talking about? None other than Blizzard Games. Late last month users started reporting on the Wine APPDB page for Diablo 3 that their user accounts where getting banned simply for running their games using Wine! So this is me providing a fair warning to everyone else out there running Diablo 3 via Wine - don't. Unless of course you feel like having wasted 60$ spent to buy the game.

To quote some of the frustrated Linux gamers:


"Well I've had Diablo running on my FreeBSD machine now for a couple of weeks and have a level 53 Wizard.

I just got notice while trying to log in last night that I was banned, and when I checked my email, I hadn't received anything from Blizzard.

After I opened a support ticket with them, a short while later, this is what I received in email:

Account Action: Account Closure
Offense: Unapproved Third Party Software
A third party program is any file or program that is used in addition to the game to gain an unfair advantage. These programs may increase movement speed or teleport heroes from one place to another beyond what is allowed by game design. It also includes any programs that obtain information from the game that is not normally available to the regular player or that transmit or modify any of the game files.

I don't run any programs as described above.


"I got banned last night as well. Other than running under Wine I can't imagine why. Level 30ish char and not so much as a gaming keyboard.


"Ditto. I suddenly got a banned email last night, and I'm more or less in the same position. I think they're getting a bit trigger-happy with this, considering I've been running WoW for years under WINE, too.

Please stop the madness Blizzard. You should try focusing your banning efforts on people actually cheating instead of those simply trying to play your games on their OS of choice. If you are looking for more information on this topic there is a fairly good write up about it here.