Enlightenment Foundation Libraries Application Round Up

Most folks who have been around Linux and/or open source software for awhile are aware of what GTK and QT are - tool kits for building applications. Something that not as many may be aware of is that there is another open source tool kit out there - the Enlightenment Foundation Libraries. These serve as the building blocks not only for the Enlightenment desktop, but also for a growing number of applications.

Today I am going to provide a quick round up of applications written utilizing the Enlightenment Foundation Libraries. 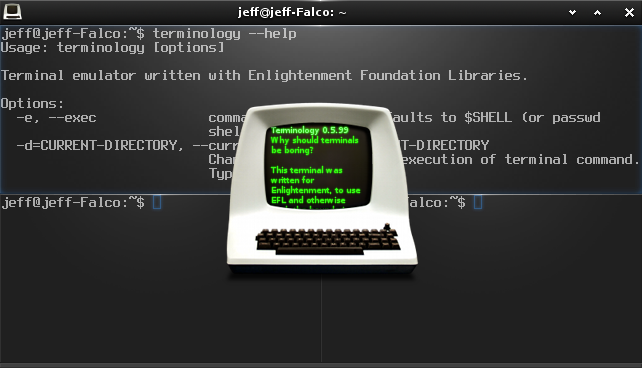 Terminology brings "fun" back to the terminal while still being plenty practical. Supporting split panes and slew of other nice features it is stable and fast. 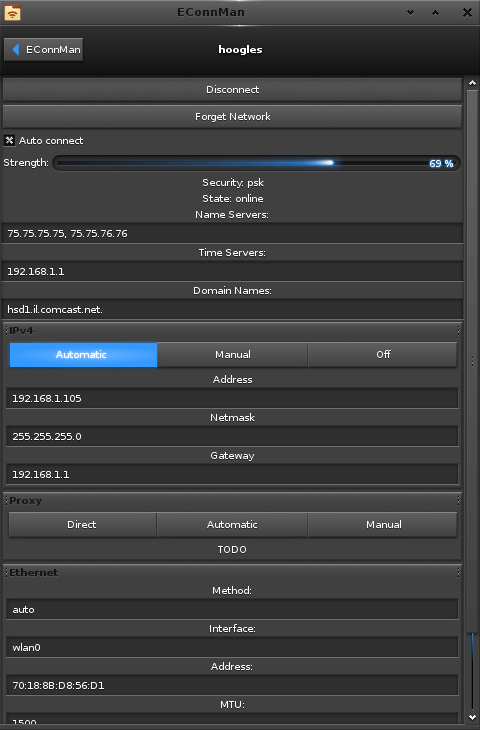 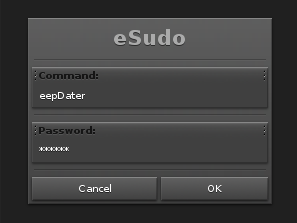 A simple graphical tool for the sudo command. Supports the same functions as similar tools such as gksudo. Also supports direct integration with other python EFL applications. 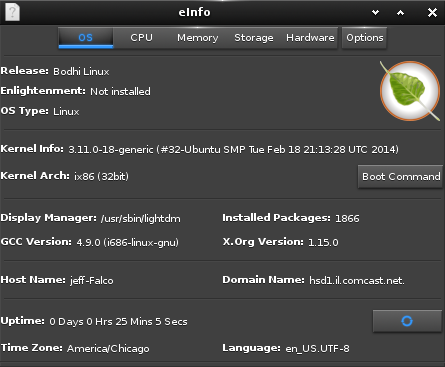 A tool for displaying information about the hardware in your computer. Supports exporting the formation collected to a text file. 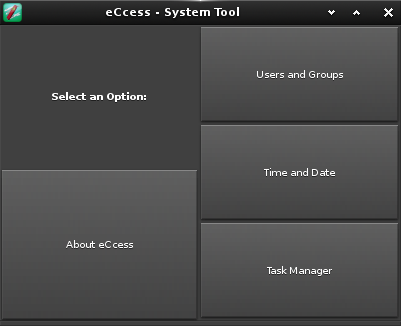 eCcess provides a few different functions. It is a GUI for managing users on the current OS and assigning/removing group permissions. It can change the current date and time and finally it provides a simple task manager. 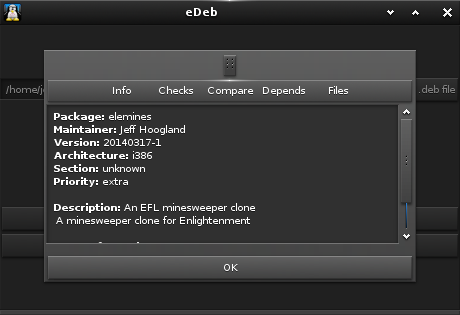 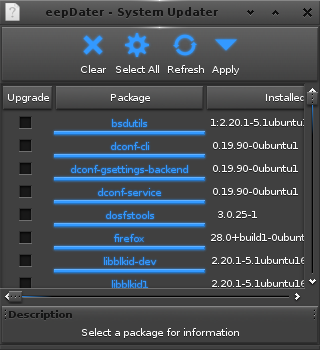 A tool for installing package updates on apt-get based systems. 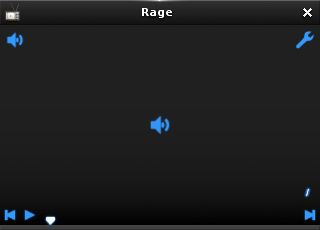 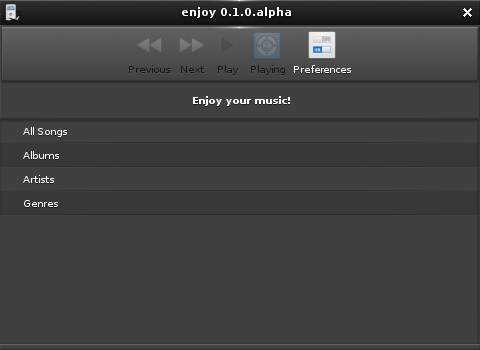 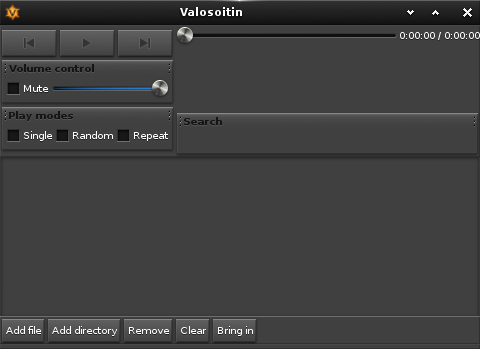 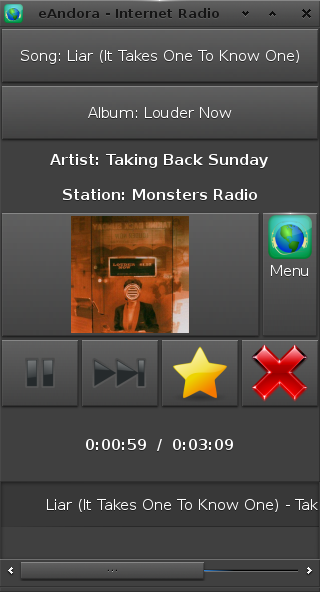 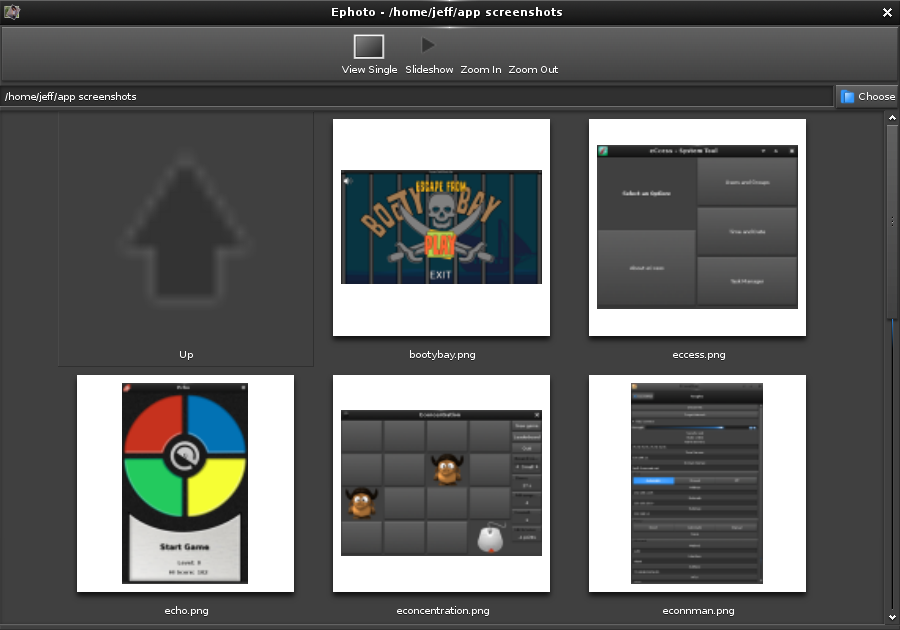 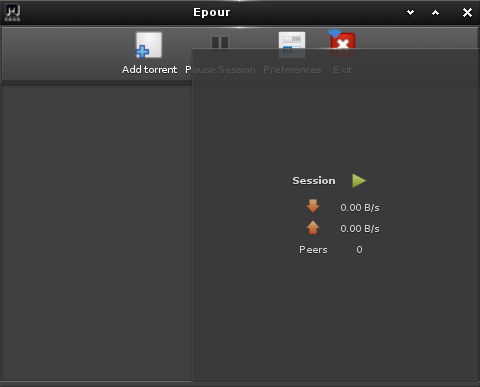 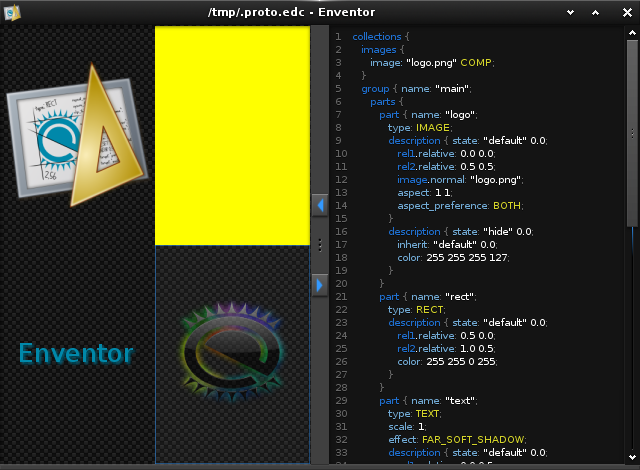 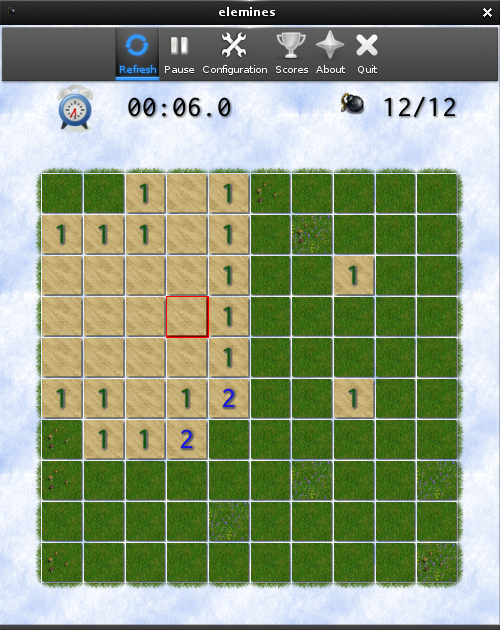 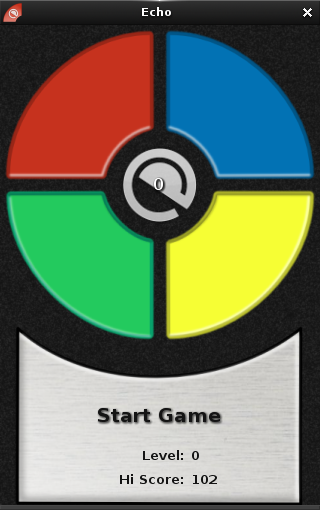 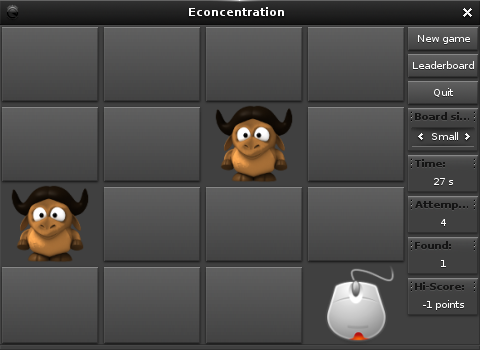 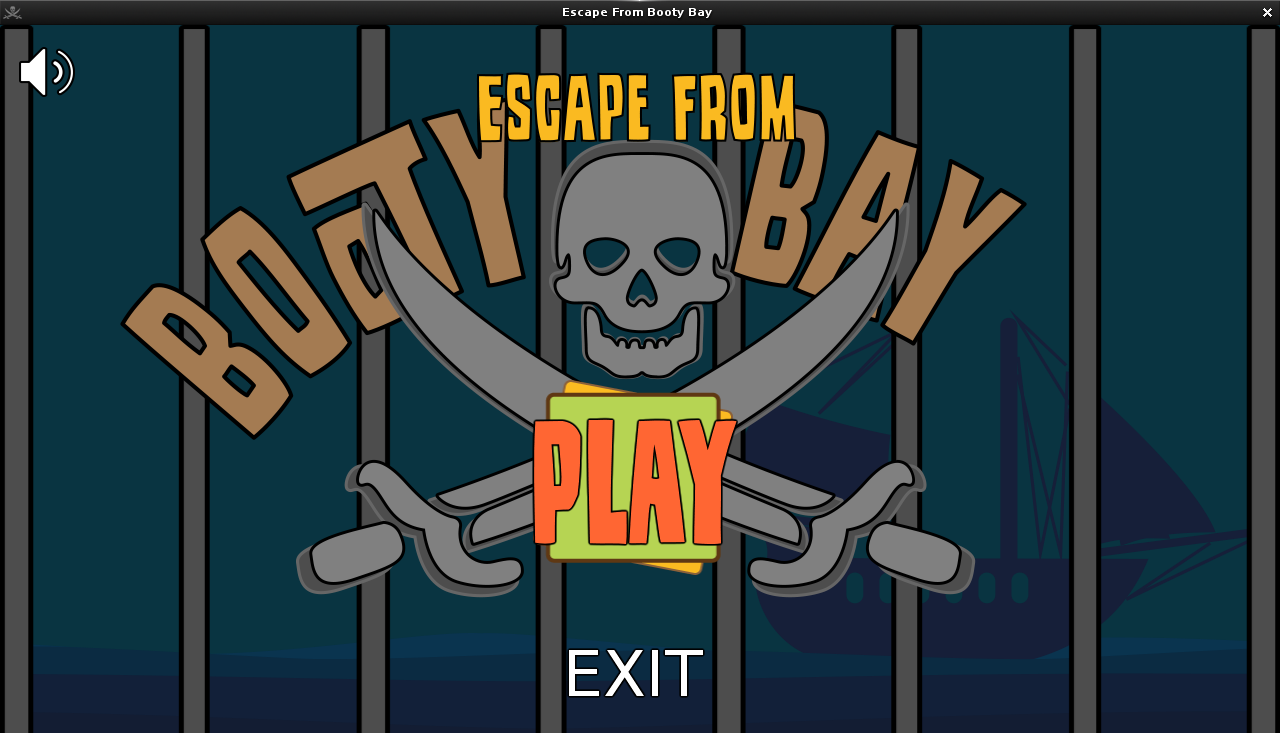 Hopefully I've introduced you to some new wonderful applications today! Most of this software is fairly new though, so sadly many of them will not have packages in many Linux distribution's repositories. You can however find every application listed here in the Bodhi 3.0.0 repos (or you can add this repo to your Ubuntu 14.04 install).

If you know of an awesome EFL based application that I haven't included here today - please let us know what it is - and where to find it - in the comments below.

One of the things I am working on for our Bodhi 3.0.0 release this summer is a simple GUI system update tool written in Elementary and the Enlightenment Foundation Libraries. Today I would like to share an early version of this tool I am calling eepDater (pronounced epp-date-er), which is written in python utilizing the EFLs.

eepDater provides a very simple, but functional, GUI for selecting which package updates you'd like to install on your computer via apt-get: 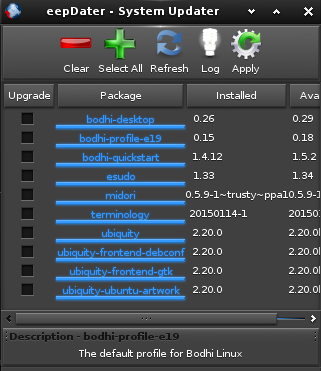 You can simply check the box for the updates you'd like to install and then hit the apply button. Hitting refresh will check for package updates: 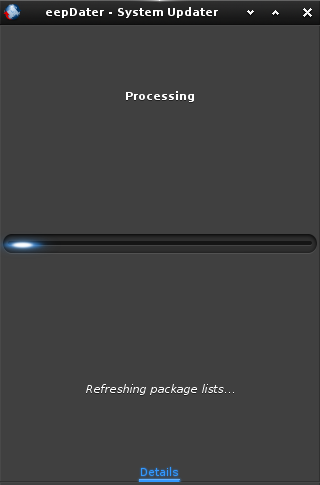 One thing worth noting is that eepDater does not include any code for escalation of privileges for installing software. This means you should launch it with something such as eSudo.

If you are using at least Bodhi 3.0.0 you can install eepDater on your system with the command:

For anyone else out there, you can find the eepDater source code on GitHub here.

Have any questions or suggestions feel free to drop them below! Keep in mind though this tool is intended to be simple by design.

One question we often had users ask us in the past was if it was possible to convert an existing Ubuntu LTS install into Bodhi Linux. Previously the answer to this question had always been "No", but with our 3.0.0 release built on top of Ubuntu 14.04 we are finally looking to change this. The following is how you can add the latest Bodhi desktop to your existing Ubuntu 14.04 install.

Step 1: Add the Bodhi Repo to your Sources

Open a terminal and run:

At the bottom of the file that is opened, add the line:

Next you will need to sync your package lists with the command:

If you have an older computer or just prefer E17 you can install that instead with the command:

After this completes an "enlightenment" session should now be available in your login manager.

Buying Chromebooks for their Hardware, not their OS

I've kind of been on a Chromebook kick lately. Last month I posted a review of the Acer C720 I picked up recently, to summarize: I really love the device.

I think computers like Chromebooks are the way of the future, but not because of their operating system - because of their hardware. Relatively low cost laptops with SSDs for storage and an insane battery life are everything I want in a computer.

I liked the hardware specs of the Acer C720 so much, I've decided to replace not only my old netbook with a Chromebook - but I've replaced my primary work laptop with one as well. I picked up an HP 14" Chromebook this past weekend which has identical hardware specs to the Acer C720, while providing an even longer battery life:

Since I started posting about these laptops and my work with Bodhi Linux on them I've had piles of Linux users ask me why I am buying Chromebooks with the intent of running something other than ChromeOS on them.


This question is VERY hypocritical.

Some even go so far as to recommend "traditional" laptops that would have been a better choice. Guess what operating system these traditional laptops come with? You guessed it: Windows! Buying a Chromebook with the intent of installing a different Linux distribution on it is no different than purchasing a Windows laptop with the same intention.


Well, I guess it is a small bit different. You see - when I buy a Chromebook not only am I not paying a Windows tax for my hardware, but I am getting a laptop with a sleek form factor that gets an amazing battery life. To get these things from a Windows PC you generally have to pay a giant premium.

In closing, if you are in the market for some sleek Linux hardware at a low cost I would highly recommend checking out the Acer C720 or the HP 14" Chromebooks.

Cheers,
~Jeff Hoogland
Posted by Unknown at 9:03 AM 30 comments:

As promised I've put together our first Bodhi Linux disc that is built on top of the upcoming Ubuntu 14.04 release. Keep in mind this is a very early image not intended for production machines. There will be issues.

That being said, we are very interested in user feedback on our first couple pre-release discs for this version. Because we have a new major release we are trying a few different things that we want your input of. Features of note in this 3.0.0 alpha image that different from our Bodhi 2.x.y base:

The best place to give feedback regarding this release is in our 3.0.0 pre-release forum section. Let us know what you think about these changes or let us know if you have suggestions for improvement. For this first release I've only prepared a 32bit PAE enabled ISO image. Starting with our beta release next month we will provide a non-PAE, PAE and 64bit disc image like we do for all official releases.

Also - don't forget you still have until the end of this month to donate and be entered in our Chromebook raffle!