Fedora is one of those Linux distros I have always wanted to love. It is sponsored by one of the top FOSS supporting companies in the world, it has strong principals in free standards, and yet somehow every time I get around to installing a new Fedora release it is just enough of a hassle that I end up removing it from my computer and reinstalling some form of Ubuntu. This is why Fusion Linux sparked my interest. Fusion Linux aims to to for Fedora what distros such as Linux Mint, PinguyOS, and Zorin did for Ubuntu. It aims to alleviate much of the messy setup work that is required to get a fully functional desktop operating system out of Fedora. It does this by preinstalling useful applications and codecs, including Adobe Flash and Sun's Java. It does all this while remaining 100% backwards compatible with Fedora.

For this review I will be using the latest release of Fusion Linux, which is their beta release based on Fedora 14. This version comes in a hefty 1.6gigabyte download, a bit large compared to the 700megabyte CD sized distros such as Linux Mint, but not too much larger than Pinguy and Zorin. The first thing you will notice when booting up Fusion (and I did a double take when I first saw it) is that their icon is a hotdog with legs...

According to the Fusion Blog this logo is really more of a funny place holder and they are looking for a graphics designer to create a real icon for the final release of Fusion 14, personally I think it gives the disc some unique personality.

Upon booting the operating system you are presented with a gnome desktop that largely resembles Linux Mint: 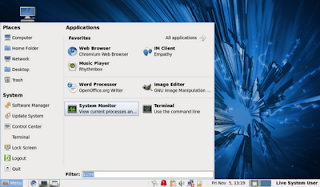 This isn't a bad thing though, for those coming from a Windows environment this setup will feel familiar. In fact, the menu you see in the lower left hand corner is the Linux Mint menu! Right next to this menu there are launcher icons on DockXBar for Chromium and terminal.

Also present on the desktop is the wonderfully useful "autoten" script. The autoten script allows for easy installation of extra packages on Fedora, you can see that many of the applications from this script come preinstalled on the system: 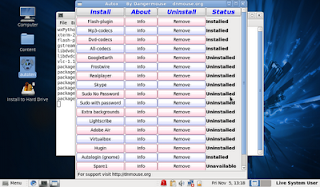 The reason Fusion has such a large download size is evident when you take a look at it's default software selection. It is a sizable list:

System Tools
I only have a few comments about the selections Fusion Linux makes. First, is that there are two applications installed for several tasks including Brasero and K3B for burning CDs and Firefox and Chromium from webrowsing. While I am on the topic of Firefox, I would like to mention that Fusion ships with the beta 6 version of Firefox 4. This is a good thing, the beta is fairly solid and much better than firefox 3.x. I personally have been using it for several months now without issue. The installer for the live disc is the same one Fedora itself uses, so while it is not as friendly as Ubuntu's installer it is more than functional.

Also present is a wonderful selection of FOSS games that should keep most children (and some adults) entertained for a good long while. What is lacking from this application list you may notice is that there is no IRC client installed by default. The only issue I had with the software was that upon installation the system already had broken packages. Running yum update with the --skip-broken argument allowed the system to upgrade just fine though.

To finish on a good note I would like to mention I used my T101MT Asus tablet as my test computer and 100% of the hardware was functional with out any extra configuration! This is fantastic compared to the amount of work it takes to get the tablet to function under Ubuntu 10.04 (it has gotten better under Ubuntu 10.10, but it is still not 100% functional OOTB)

Overall Fusion Linux is a fantastic distro and for any beginner (or someone that doesn't want to deal with setting up Fedora) I would highly recommend Fusion Linux.