With Nokia's recent news of jumping off the Linux bandwagon, it makes this Linux user wonder if a couple years down the road if we are going to have any choice other than Android when choosing a Linux based handset. I keep fairly current on news in the FOSS world, but I had never heard about the LiMo Foundation until a few days ago. LiMo, which stands for Linux Mobile, aims to be a unifing force in the mobile Linux world, to quote:

"LiMo Foundation is an industry consortium dedicated to creating the first truly open, hardware-independent, Linux-based operating system for mobile devices. Backing from major industry leaders puts LiMo at the Heart of the Mobile Industry and makes LiMo the unifying force in Mobile Linux."

The LiMo Foundation has some pretty big backers including Samsung, NEC, Panasonic, Vodafone, Mozilla, and Verizon. Now why is this post entitled "Samsung is backing Linux" and not NEC, Panasonic, or any of the others listed on the members page? That is because in addition to being a member of LiMo, Samsung is developing their own Linux platform - Samsung Linux Platform or SLP. SLP is based around GTK, EFL and a few other open source projects (I guess with Nokia's recent betrayal thats going to make QT the under dog). In Samsung's SLP overview they provide a handy graphical layout of what is going to go into their Linux Platform: 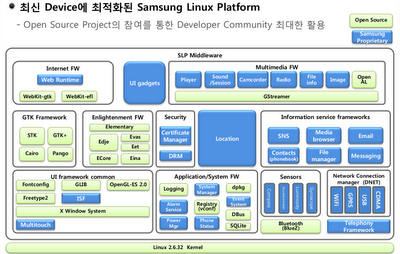 As with Android and Maemo there are a number of closed source components in the system, but nearly half of the system is Open Source. Most notably in addition to EFL and GTK under Application/System you will see DPKG listed, this brings me personally a sigh of relief as I much prefer dpkg to rpm. Samsung is also investing in the open source products they plan to use, they are the ones that have been funding the development of EFL in the past year.

While there are not any Samsung devices currently on the market running SLP, you can still support Samsung and FOSS by purchasing one of their many Android devices in the mean time or their Wave S8500 which runs on the Unix based Bada platform. Personally I am hoping that by the time I am ready to trade up my N900 a year or so from now Samsung will have some of their own Linux based handsets on the market.

What do you think about this? Is SLP useless fragmentation in the Linux Mobile market or is it important that FOSS advocateds have more than just Android to turn to? Personally I believe it is the latter of the two, competition stimulates innovation.