A little over three weeks ago I purchased my first Acer C720 Chromebook. That is right - I liked this little guy so much I went and picked up a second copy so my wife and I could each have one.

For most of last year I kicked around a Samsung ARM Chromebook with me - so much of my discussion here will be in comparison to that device since it is still comparable price wise to the Acer C720.

I've used dozens of different netbooks over the last few years and I must say the performance of this new Haswell based Intel chip is phenomenal. A dozen browser tabs open, Netflix streaming all while writing an article or two and the little guy doesn't skip a beat.

This thing can do some gaming as well. While it isn't going to run anything at maximum resolution, I've enjoyed the following titles at one point or another on my C720 in the last few weeks:

The Acer C720 has a solid plastic case, that is plenty functional. I wouldn't say it is going to win any beauty contests, but it isn't unappealing either:

The dimensions of the C720 are 11.34 x 8.03 x 0.75 inches and it weighs in slightly more than the Samsung at 2.76 pounds. I know many people who are used to only having full size laptops find netbooks a bit on the small size, but personally I find the eleven inch C720 to be the perfect middle ground between a tiny screen like a tablet and fuller size laptops.

The Acer makes up for its slightly heavier weight with a slightly longer batter life. The C720 lasts upwards of eight hours on a full charge. Obviously the exact duration will vary depending on how hard you are hammering the processor and how bright the screen is.

The screen on the C720 is basically identical to every 11" Chromebook with its 1366x768 resolution. Honestly I hope this is one of the things we see an improvement on in the next generation of Chromebooks.

The ports on the C720 are identical to the Samsung Chromebook:

One giant improvement for the C720 though is the location of all of these ports. Unlike the Samsung which crams both USB, the HDMI and the charging port all next to each other on the back of the device, the C720 has USB ports on opposite sides: 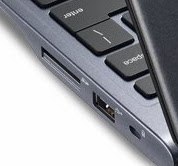 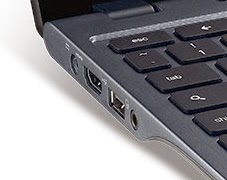 Just like the Samsung - the SD card slot on the C720 does not fully encompass an inserted device, meaning you won't want to travel with one inserted:

Something you want to be aware of when looking to pick up an Acer C720 is that there are a few different versions of this little laptop you have to choose from. I'm not going to cite any prices here because they seem to fluctuate week to week depending on where you look, but any version of this device you should be able to pick up for under 300 USD.

There are three* different "stock" versions of the Acer C720. Where they differ is the size of their internal storage and memory. The options are:

*There is also the C720P that has 2GB of memory, 32GB of storage and comes with a touch screen.

The most important thing to note if you do decide to pick up an Acer C720 is that the storage IS user upgradable while the RAM is NOT. That means if you pick up a C720 with 2GB of RAM and decide later you want more - you will need to upgrade the entire unit.

If you are like me and think a C720 could easily become your day to day computer if it just had a bit more internal storage space then you simply need to upgrade the internal drive. You will simply need to pick up an M2 SSD such as this one on Amazon. Then you can simply follow this instructional video for changing out your SSD:


As someone who has opened up many laptops in his time - I must say that the C720 is very easy to get apart/back together.

By default the C720 comes with Chrome OS preinstalled - if you are happy with that skip onto the next section.

One of the best things about the C720 though is that Acer has provided it with a version of Coreboot that is able to load into a traditional BIOS in the form of SeaBIOS. This means that if you aren't happy with just Chrome OS you can install a traditional operating system on the device fairly easily.

Honestly I don't see any reason not to put a full OS on the C720. The hardware is more than capable of handling it and installing the latest version of Google's Chrome browser does everything Chrome OS is capable of.

No hardware is perfect and the C720 is not an exception to this rule. It is however a fantastic little PC for the price point that it comes at and I have been very pleased with it thus far. I picked up my C720 with 4GB of RAM refurbished for 190 USD directly from Acer via Amazon, then factor in the 100 USD SSD upgrade and I have a fantastically fast, mobile, PC with a good amount of storage for under 300 USD - not a bad deal.

Do you have a C720? If so what are your thoughts on the device? If you are looking to pick up a C720, but have a question about something I didn't cover above, please feel free to post a comment below asking.