Late last week I came into possession of an old AT&T Tilt 8925. At one point in time this was an impressive piece of mobile technology, however I am sure we all know this is no longer the case. The reason I was given the phone was because it was running Windows Mobile. The device ran slowly with this operating system and suffered from enough issues to cause both my mother and my older brother to get rid of it for other smart phones (Symbian device and an iPhone). The phone itself does not have bad hardware by any means. It sports a 400mhz ARM processor, 128megs of RAM, and 256megs of NAND storage plus a MicroSD expansion slot. If the hardware is not the issue then what causes the device to run slowly?

Just as when I receive any computer with a Windows based operating system on, my first inclination is to format said device to some variation of Linux on it. So I hopped on the Linux Answer Machine and quickly found my way to the XDA-Developers homepage. The XDA-Developers community is a fair size group of people that are dedicated to hacking and cracking all things Windows Mobile and Android.

I quickly found my way to the Android on HTC Kaiser sub-forum there. There are a multitude of different HOWTOs and guides for installing various forms on Android Linux on your Kaiser device. At first it can be a bit overwhelming, there are piles of different .NHB files to pick from, different kernels, and even different Android versions! Several days and many hours of downloading, flashing, and a few posts later the following are the steps I took to get a fully functional Android system running on my HTC Kaiser:

The first step on this journey is to HardSPL your device. What this does is allow you to flash any ROM to the hand-held.

Next, now that we have the device unlocked, we want to update the system's "radio". To do so head over to here and download the latest radio. If you need a hand on how to flash this updated radio - check this out. Don't worry, I had to read through it my first time as well.

After you upgrade your radio we need to get that pesky Windows Mobile off of the phone and get it actually booting Linux. To accomplish this you need to go download the proper .nbh file for your Kaiser and flash it.

If you have ever used Linux before you know your system needs a kernel of some sort to boot from - head over to here and download the zImage file provided. Place the download file on your MicroSD card in a folder called /andboot (if this folder does not exist, create it). Also note that if the file is not called simply "zImage" rename it as such (most of the files you download have a date or some other extension after this name)

Now you have some choice. There are two different variations of Android I personally found worked best on my HTC Kaiser (and I tried more than a few). The first is Eclair. Eclair is based on OpenEclair and gives you a variation of Android 2.1 on your Kaiser device. Under Eclair I had working call/text/multimedia messaging/data/android applications - however no matter what form of patches, I found around the Internet, I applied I was not successful in getting my device's wifi, bluetooth, or camera to work. I also found that this newer version of Android tended to run poky by comparison (still faster than Windows Mobile however) on the Kaiser's older hardware.

My current Android build of choice for my Kaiser, and the second one I would like to recommend here, is Myn's Warm Donut. Under this build I have a fully functional Android system on my Kaiser. Warm Donut is a variation of Andriod 1.6 for your device, this version is quite snappy/responsive. Which of the two builds you would like to use is up to you - personally I recommend trying them both and seeing which one you enjoy more/suits your needs.

Anywho - the next step you take after downloading your preferred flavor of Android is to extract the androidinstall.tgz file again to the /andboot folder on your MicroSD card. Next, pop the SD card into the bottom of your phone and hold down the volume up or dpad center as the device boots. The select "install" from the menu and it will extract the install package and create the necessary files to boot Android on your phone.

The last thing I would like to mention, is that if you are using Warm Donut and would like Wifi/Bluetooth support on your device you will need to apply the patch found here. To install the patch it is the same as installing the base system, extract the androidupdate.tar to the /andboot folder on your MicroSD card, boot the device while holding the proper key, and this time select "update" instead of "install". The only extra step here, is that after you apply the update also need to select "fix permissions" from the menu so the system will work properly. Also, if you are running Donut, I found that during the initial system start the setup wizard would crash on me the first time I tried to log into my Google account - don't panic if this happens to you. Simply reload the setup wizard and the second time I entered my information it worked just fine for me. 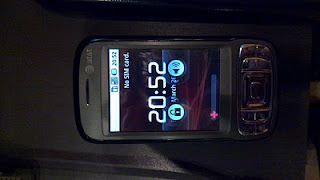 Trouble Shooting:
Wifi/Bluetooth not Working - If you are using Donut check two paragraphs up for instructions on this. If you are using Eclair check the main Eclair thread for suggestions, lots of people doing debugging there. As I said I have yet to be successful at getting my wifi working under Eclair.
Microphone Non-Functional - Try a different kernel (zImage). The first kernel I used had everything working aside from my microphone.
Colored Lines/Discoloration on Screen - Make sure you downloaded the proper .nbh file for your device. If you have the wrong one it may cause this issue. Don't worry, reflashing the new .nbh file will not affect any of your Android data.
Function Keys Miss Mapped - See Colored Lines/Discoloration on Screen. Same solution.
~Jeff Hoogland

Note: I do not take credit for the method or files presented here, the hardworking people over at XDA-Developers deserve all the thanks. I simply assembled this guide for others who may be overwhelmed at all the choices when first trying to put Android on their Kaiser and for myself as a reference point in case I need to setup another device in the future.
Posted by Unknown at 7:32 PM