Elive: Where Debian meets Enlightenment
This is Elive's slogan. As I am sure you can guess, it is a Debian based distribution that uses the Enlightenment window manager. I always like to jump in with both feet when it comes to playing with technology, so to get the best feel for what Elive is and how it works I downloaded the LiveCD and installed it as the primary operating system on my Sager Laptop.
First Impressions:
Booting the LiveCD for the first time gave me one of those "wow" moments. This was the first time I had ever used a distro that used the Enlightenment window manager. It is stunning, to say the least. (minus my function+mute, all of my hardware worked OOTB). 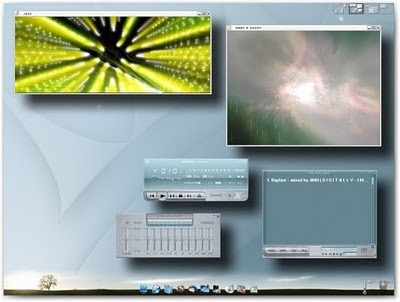 Taking a step back a moment, I'd like to mention the start process for the live environment. I like the way Elive boots up. It asks a few simple questions about your system at start up that help things to run smoothly. By asking for resolution, it allows Elive to have a seamless X loading (no black flickering or things of that sort like most distributions). The live system also loaded the appropriate closed source driver for my nVidia card on its own (I know this is a turn off for some FOSS people, but I like to use my hardware to its full extent).

Booting from a flash drive using the live system is smooth and flawless and the UI is easy to use. Located at the bottom of the screen is a dock bar for loading commonly used applications. Just to the right of this is a dock bar for battery, wifi, and audio controls. In the upper right hand corner of the screen, you can switch quickly between your multiple work spaces. (additionally, alt+fX keys switch between each of the twelve desktops).

Installation:
Located on that handy dock bar is the installer button. Before I go any further, I feel I should mention something that sets Elive apart from many other distributions (and keeps it from making the top ten on DistroWatch IMO). It is, that in order to install Elive on your system you have to acquire an online "installer" module. How does one obtain one of these modules? By making a donation to the project of course.

That is right: You have to pay to install Elive.

It's not a large cost. For a minimum of 15 dollars (USD - payed via paypal) you can receive the installer module. I logged into paypal, sent the funds, and was on my way. Other than a brief system hang at one point in the installer (which only took a moment to recover from) the install went flawlessly. Again, I would just like to mention the unique feel the installer has (like the rest of the system). A particular feature that is kind of small, but worth mentioning, is the descriptions the installer has for each of the file-systems before formatting. Like I said, small feature, but useful, I feel, none the less.

Using the System:
Elive only offers a 32bit image. My system has 4gigs of RAM. As such, one of the first things I do when installing a 32bit distribution on it is obtain a kernel that supports my memory in the 32bit environment. Enter another feature that is unique to Elive (and almost worth the donation all in itself):

Equatable to Window's system recovery mode, "Nurse Mode" allows the user to perform a number of recovery/restore options on the system. Among these is a one click install for different system kernels, among which include a "highmem" kernel to allow up to 64gb of RAM on the 32bit operating system.

After a restart, I was quickly loaded into my Elive system. Using enlightenment as a window manager took some getting used to at first, but after a couple of hours I had grown accustomed to it, and I must say, I like how enlightenment handles itself as a whole. There are only two issues I had with Elive. The first was some stability issues (Elive uses a mix of e16 and e17, the latter of which is the testing branch of enlightenment), and the second was purely visual - there was no way I could easily find what appeared in my applications menu (all the guides I found online were for e16 and the files they referenced did not exist on my Elive system). Beyond this, I also experienced this bug, which was rather annoying.

Two final notes about the system. I'm a gamer off and on and I run Steam through CXGames on my Linux system. Under all other window managers I have used thus far, the Steam GUI has this pesky habit of "jumping" from workspace to workspace so it is always visible in your active one (regardless of its settings). Under enlightenment all my Steam windows stayed where I left them. And lastly, while it is an easy fix: by default there are no source repos enabled under Elive. Meaning apt-get build-dep does not work OOTB.

Software:
The default software configuration on Elive is strange, to say the least. For starters, there is "demo" software installed on the system. Very "Windows Like" IMO. No open office. Abiword is installed, however I prefer the former of the two. There is no pidgin or multi-messenger client by default, but there is a Linux "amsn messenger". A fun idea is that solitaire is installed by default and it auto-loads it for you to play when you begin the system install.

Lastly, I use Google's Chrome browser on all my systems. Chrome did not play friendly with enlightenment. It did not want to add itself to my application launcher at the bottom of the screen and it had no idea what to do with any of the files it downloaded by default (.deb files didn't open with gdebi and "open containing folder" out-right failed).

Final Thoughts:
Also worth mentioning is that the Elive community as a whole is rather small(which is a shame, it's a wonderful distro). The two threads I posted are still unanswered some three days later, so if you do run into an issue with the system, best of luck finding help solving it!) Had enlightenment been a bit more stable as a window manager Elive would have stayed as the staple distro on my Sager for some time, but as of now my Sager is moving back to Debian Squeeze.

All in all, if you have never personally used the enlightenment window manager, I highly recommend you, at the very least, download the Elive LiveCD and give it a test drive. Once e17 fully matures, Elive will easily be one of the best distros out there.

~Jeff Hoogland
Posted by Unknown at 12:20 AM