Back on October of last year I did a comparison of Cedega and CXGames. As of yesterday Codeweavers launched their CXGames 9.0. If we had heard any news or updates from Cedega in the last five months this would be an updated comparison, but since Cedega has not changed I simply am going to be reviewing the newly released CXGames.

The first thing you will notice when using CXGames 9.0 if you had used past versions is that the GUI has under gone a refreshing change. 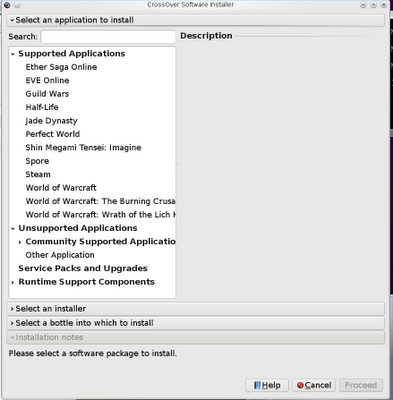 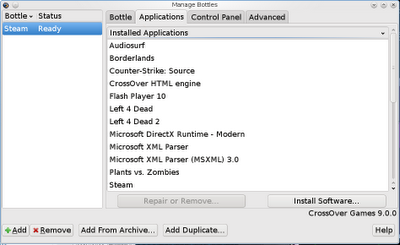 One of the key things you will notice when installing a game is that there are now "profiles" built in for games. Officially supported games have a profile as well currently a handful of other games. Similar to how Cedega works people can now submit the Wine settings they use to successfully run a game to Codeweavers so others can replicate these settings with a single click from the installer. With the number of users Codeweavers has accumulated over the years I have no doubt that we will soon see profiles for the multitude of gold and silver rated unsupported applications listed in the Codeweaver's data base.

New GUI, game profiles, what else is new in CXGames 9.0? A much needed Wine version upgrade has been added to this release. CXGames is based off of the recently released Wine 1.1.42. If you are not aware newer Wine versions often times include many bug fixes that can allow applications that had failed to run under Wine in the past to suddenly start working. The benefit of purchasing commercial Wine software such as CXGames is that while you gain all the benefits of an updated Wine version you do not have to worry about experiencing any regressions that may have found their way into the Wine base.

From a gamer's aspect the most important thing about this new release is added support for the recently released Steam GUI. The new interface for the Steam content delivery service I find runs much better under CXGames 9.0 than the old Steam interface ever ran under past Crossover versions. CXGames 9.0 also advertises added support for StarTrek Online and the Starcraft 2 Beta. There is a profile under "unsupported applications" for StarTrek, I am not much of an MMO guy so I have not tested this game yet. Upon searching for an entry for Starcraft 2 you will not find one, on the Crossover forums one of the staff makes the claim that it just works OOTB when selecting "install other application". I can confirm this is not the case. By default SC2 crashes at upon startup, after some tweaking I have it at least showing me a loading screen (even though it freezes with no terminal output).

Finally I always like to mention cost, CXGames 9.0 continues to be 40$ (this includes one year of support and updates). Overall CXGames 9.0 is another great release in a fantastic product line. The GUI updates are for the better, the game profiles work well, and a newer Wine version is always appreciated. If you are a Steam gamer on Linux then CXGames 9.0 is a must have, if Starcraft 2 under Linux is what you are looking for you are going to have to pass on CXGames for the time being - but I have no doubt that by the time SC2 releases at the end of July it will be fully supported under Crossover.

~Jeff Hoogland
Posted by Unknown at 8:43 AM