One Year with Bodhi Linux

Today marks the one year point from our first Bodhi Linux "0.1.0" release. I feel we have come a long way in such a short time and I am happy with everything the team has accomplished thus far. Would you believe that I first started Bodhi simply because I was tired of having to recompile E on each of my half dozen systems every week?

What has been done in the last year? Well we racked up over 150,000 ISO downloads between source forge and our torrent tracker alone (and over two-thirds of these downloads have been since our 1.0.0 release in March). In addition to disc downloads it would appear more people are actually using Bodhi due to the increase of server traffic (on our main mirror) we have experienced over the last year: 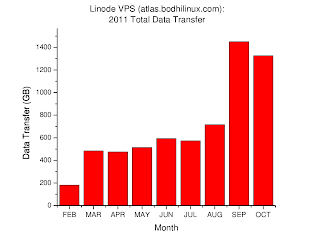 Our forums have also become fairly active. We total almost 30,000 posts now from our 1,600 users.

I would also like to take a moment to thank our community for all the contributions people have made. Our document wiki has been gaining more and more valuable content. It has become a truly great resource.

Beyond this I would like to thank everyone that has contributed a monetary donation. When the Bodhi project first started Ken and I paid out of pocket for all the server costs. Since we opened the door for donations in February we have more than covered our server costs each month. The 150$ our main mirror has cost the last couple months may not seem like much, but it is costly for two students to maintain on their own.

Looking to the future I'd just like to clear up a few release dates and plans our team currently has. First off our next update release (1.3.0) will be out towards the end of December. This will again be something current Bodhi users can easily update their systems to obtain - it's main goal is to keep the LiveCD current. We will continue to have these update releases for our 1.x.y versions until the release of Bodhi 2.0.0

Speaking of Bodhi 2.0.0 - this will be our next "major" release, meaning a full reinstall will be recommended for those wanting to move from the 1.x.y version of Bodhi. 2.0.0 will be re-based on the new Ubuntu LTS 12.04 version. With this version we also plan to add a 64bit version of Bodhi that will have workstations and multimedia production systems in mind. Since Ubuntu 12.04 releases in April expect to see Bodhi 2.0.0 sometime after that, most likely May or June.

While I'm on the topic of new architectures I'd like to also say we will be moving forward with our Debian based ARM build. I'm also excited to announce that Genesi has become a Bodhi Affiliate - meaning we plan to support our ARM build on their hardware once we get a bit further along. We also hope to extend our support to the Raspberry Pi devices as well once they are released.

Thanks for reading and we hope you enjoy using Bodhi!

~Jeff Hoogland
Posted by Unknown at 10:52 AM