Genesi currently offers two products with the EFIKA mx51 ARM board. They are the SmartTop and the SmartBook. I own one of their SmartBook models and today I would like to do a comprehensive overview of the device.

Size/Weight:
The size of the Smartbook is exactly what netbooks where intended to be when they where first created. It is thin and lightweight while still being a functional tiny laptop. The device weighs just under 1 kilogram and has a form factor of 160x115x20mm.

Hardware:
The Smartbook sports an 800mhz ARM processor, 512MB of RAM and 16gb of internal storage. One of the benefits of being an ARM chip is that the Smartbook is fan-less - making it silent while running. For wireless connectivity the device has b/g/n support for wireless networks, as well as 2.1 + EDR for bluetooth and optional 3g support. In terms of ports the Smartbook has two USB jacks, SD card slot, micro SD card slot and an audio out port. The screen is your typical 1024x600 resolution you get on most 10" netbooks to date.

The keyboard on the Smartbook is easily the best keyboard I have ever used on a 10" netbook. It has a full six rows of keys and takes up over 90% of the width of the device. It is a chicklet design so typing is a smooth and easy process. The track pad in contrast to the keyboard might very well be the worst track pad I've ever used on any netbook or laptop. It is tiny and the left/right click buttons are awkward to press down. Thankfully it has the saving grace of being able to left click by simply tapping on the pad. Holding a left click and moving the mouse is a painful process though. 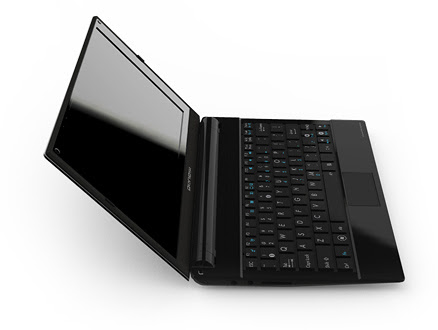 The hardware in the Smartbook isn't going to break any land speed records, but then again if you need some serious computing power odds are a netbook isn't for you.

Software:
The Smartbook comes with Ubuntu 10.10 as it's default operating system. Honestly the default Gnome 2 desktop is a bit sluggish on the Smartbook hardware. Thankfully the power of the Ubuntu repositories is at your finger tips and you can very easily install LXDE or some other light-weight desktop of your choice. Because the Smartbook is an ARM device, some closed source technologies (such as Adobe Flash) do not support it.

If you are not a fan of Ubuntu, fear not - because the Smartbook is easily one of the most open source friendly ARM devices currently in existence. I just recently published a guide for getting Bodhi running on the device. Beyond this I know other people have had success running Debian, Arch and Gentoo on the Smartbook.

Cost:
One of the most attractive things about the Smartbook is it's price tag. The Smartbook will only set you back 199 USD. Not a bad price at all for this little guy.

Wrapping Up:
I've had my Smartbook for a couple of months now and all in all I am very pleased with it. In fact the only thing that I dislike about it (and was mentioned above) is the trackpad on it. This really isn't a huge deal though as I've taken to carrying around a small USB mouse for when I need to do a good deal of mouse work - which isn't often.

Whether or not the Smartbook is right for you is something only you can decided. If you are looking for something light, portable and a very good battery life - there is no beating the Genesi Smartbook.