With Steam officially being released for Linux I took some time out this evening to run a few benchmarks on my Ubuntu 12.04 based Bodhi system to see how a few of the different modern Linux desktops compare in terms of OpenGL performance with the source engine. Please do not take my numbers to be anything super scientific or precise. I simply recorded a short demo using Team Fortress 2, loaded TF2 from Steam under each of the Linux desktops with no other background applications running and ran the demo through a built in source engine bench marking tool.

The benchmarks were run on my very modest gaming laptop which sports an i7 processor, 6GB of RAM, and an nVidia 330m GT graphics card. I utilized the Steam recommended nVidia 310 driver for these tests. All the desktop setups I used were "stock" from the Ubuntu 12.04 repos, minus E17 which is using the E17.1 snapshot and Bodhi's laptop profile with compositing enabled.

Lets get right to the data shall we? You all love charts I hope! 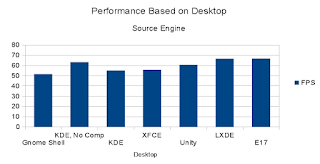 It is clear from the bar graph that E17 came out towards the top and Gnome Shell was near the bottom. Here are the numbers to a single decimal place:

I was not surprised when I saw E17 and LXDE had the best performance, they are after all some of the best light desktops today. What did shock me though was that XFCE - which claims to be fairly light - was very low in terms of performance!

Based on the above numbers XFCE performed around 17% slower than both LXDE and E17, while Unity was around 9% slower than the lighter desktops, and Gnome Shell was a staggering 23% behind.  One other thing worth noting is that KDE has a HUGE performance difference when you check the "disable compositing on full screen applications" box in your Kwin settings. In fact ignoring this setting loses you around 13% in performance: 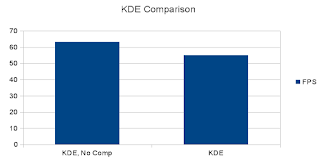 Obviously someone should run some further tests (I know I plan to when I get some more time), but from my initial small test it is obvious - if you are looking to game on Linux your choice of desktop very clearly matters!

~Jeff Hoogland
Posted by Unknown at 2:20 AM