There are a few reasons why I use Linux Mint instead of Ubuntu on my systems. That being said one of the reasons I do not list for using Mint over Ubuntu is their "Software Manager". The software manager in Mint 8 was flat out sad compared to the Ubuntu Software Center that Ubuntu 9.10 included. Now even though the software manager in Mint 9 has many improvements, it still has issues, and I don't think it is quiet on-par with the updated Software Center Ubuntu 10.04 includes.

Now I still like Mint and a poor software center is not enough to make me to stop using the distro as a whole. As such, a quick fix to the issue is to remove Mint Install and apt-get the Ubuntu Software Center. Now this works fine in Mint 8, but after installing the Ubuntu Software Center in Mint 9 I was greeted by a lovely terminal out when the application failed to load:

Open a terminal and run the following in order:

And you are all set! Run software-center and it should pop right up for you. 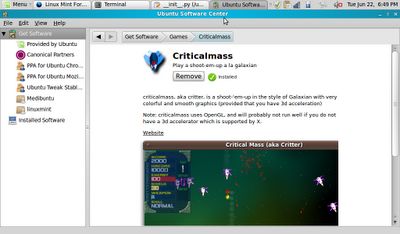 Now, if you are like myself and want the Ubuntu Software Center to run instead of the Mint Software Manager when you click "Software Manager" on your Mint Menu run the following in terminal:

Now in case you are curious (or don't trust me) the edit I made to the __init__.py file you are downloading is made on line 72 in the _get_distro function. By default this line reads:

My updated line simply manually sets our distro_id to be Ubuntu.

Hackish, but it works :) Isn't it fantastic when you have the source code for a piece of software so people can create fixes such as this?

Have any input on the subject or an issue with the HOWTO drop a comment below.