Now I am all for trying new distros and netbooks are a place where I feel Linux truly outshines all other operating systems, so when a new netbook focused distro comes to maturity I always like to take it for a test drive. MeeGo, the joint operating system between Nokia's Maemo and Intel's Moblin, has been getting alot of hype recently in the Linux community and the world at large. I can understand why, personally I was very excited when MeeGo was first announced. Nokia and Intel are both very large names that bring substantial financial backing to the table, beyond this they are also allowing the Linux Foundation to manage the MeeGo project.

After having used the 1.0 release of MeeGo that is targeted for netbook devices I really must say: I'm really not impressed.

Late last year I did a review of Intel's Moblin Linux 2.0 and this MeeGo 1.0 release is so similar to Moblin that is really doesn't even feel like a different distro. Don't believe me? Well lets start with the interface, this first screen shot is Moblin 2.0: 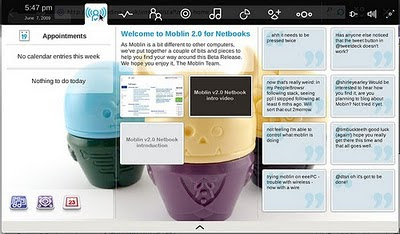 This second screen shot is MeeGo 1.0: 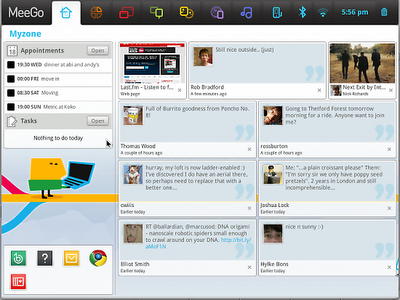 Software:
MeeGo fails to ship with an Office Suite still and the software selection from their package manager is still decently limited. Two things that are improvements in MeeGo are the default webrowser and media player. For all your media needs Banshee is at your service. Banshee is a full featured, matured, media player with plenty of features that should keep most all users happy. In terms of webrowsing, MeeGo ships two different .img files - the first uses the open source Chromium as the stock browser, the second requires you to agree to an EULA as it uses Google's Chrome browser.

Customization:
Another nice addition is the ability to customize the top bar where you switch between your different applications and zones. A piece of customization that is still lacking however is the ability to change which messaging client is integrated with the operating system (empathy is alright, but I am a die hard pidgin user and prefer to use it whenever possible).

Socialization:
MeeGo still integrates well with twitter (just as Moblin did), but unlike the latest Ubuntu release (which has Gwibber), MeeGo still lacks Facebook integration. As I mentioned above empathy is still the default messaging client and it does support facebook chat by default.

Usage:
The MeeGo desktop, just like the Moblin desktop, is snappy and responsive (just as much as lightweight desktop environments such as LXDE or E17). The operating system boots slightly faster than Ubuntu 10.04 does on my hardware (7 seconds versus 9 seconds). Over all MeeGo makes for a great "webrowsing" operating system, but for anything beyond this I would recommend something else.

Final Thoughts:
One of the reasons I was so excited about MeeGo was because it was the merging of Moblin with Maemo. I have been using Maemo on my N900 for over six months and I must say, I can't find a trace of Maemo anywhere in the MeeGo 1.0 release. Now, perhaps there is some of the Maemo core hiding behind the scenes in the MeeGo code, but personally I am just hoping Moblin did not simply swallow up Maemo.

Honestly while I am hopping the MeeGo project takes off (especially as a competitor to Android), at the same time I have to wonder what this could do to the public opinion of what Linux is. I say this because the way MeeGo is designed it does not feel like a full blown operating system as distros like Ubuntu or Fedora do (or Windows does). I would hate to see the general opinion of Linux become the idea that the operating system is limited to netbooks and hand held devices and not for "real" work/computers.