I recently came across Zorin, an Ubuntu based distro that focuses on easing a Windows user's transition to Linux by theming it's interface to look like Microsoft's operating system. Zorin 3 is built on top of the recently released Ubuntu 10.04 and by default it looks very close to Windows 7 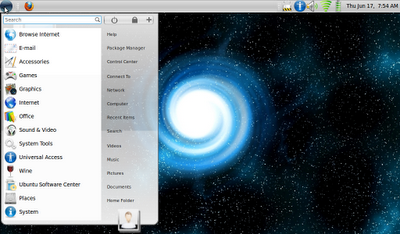 Downloading:
Zorin offers three different free version downloads
In addition to these there are also three "premium" versions of Zorin
For this review I downloaded the 32bit core version to take for a spin. All of the downloads are DVD size, the 32bit core ISO is just over 1gig in size.

Using the Live System:
Once you do a double take and realize that you are using a Linux LiveCD and not a Windows install you will see Zorin's Ubuntu roots. The webrowser and email client are at the top on the menu, each of the different categories are listed below, next is the Ubuntu software center, then places, and finally system information. I had an issue with my mouse freezing up during the live session, upon pressing alt+f2 the mouse came to though.

Installing the system is almost identical to installing Ubuntu 10.04, in fact the only difference is the images the slide show displays while the system installs.

Look and Feel:
Zorin's goal is to make a Windows user feel at home and it does a good job of this. Their is a custom gnome applet that emulates the Windows 7 taskbar fairly well 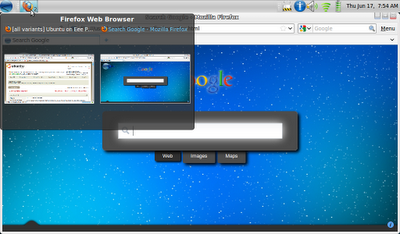 Each application appears as it's icon on the task bar and having multiple instances of the same application open causes them to stack. When you hover your mouse of the icon you are presented with a preview of all the copies of the application you have open on your current desktop. I found this window preview works better than the default compiz preview. I say this for two reasons
Also similar to the Windows 7 taskbar you can right click on an opened application to "pin" it to the start menu. 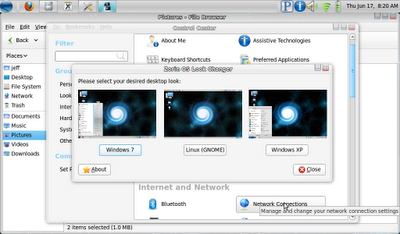 The default compiz configuration Zorin 3 has is fantastic! There is enough flare to keep most any user happy and I really like the default sounds that have been chosen for the operating system.

The only negative thing I have to say about the look of Zorin is that because the Windows 7 taskbar works best with a fatter taskbar (40 pixels by default) it makes the tray icons huge and they just look bad. Hopefully something will be done about this in a future version.

Default Software Selection:
One of the nice things about having a DVD installation is that Zorin's creators did not have to limit their default software selection. Zorin 3 comes stock with all the normal Ubuntu software plus
Something that I think will greatly confuse (and annoy) new users is that for java OpenJDK is installed by default. Don't get me wrong, I love open source software but OpenJDK just isn't as functional as normal Java. Meaning when a user goes to use a Java website that does not work under OpenJDK and they install Java they may be confused as to why the website is still not working (until they un-install OpenJDK).

Community:
The Zorin community is the weakest link in the distro. I posted a simple question on their message boards and it took nearly two days to get a response. This isn't really a deal breaker necessarily, because since Zorin is built on Ubuntu 10.04 for the most part you can get all the help you need from the Ubuntu Forums.

Final Thoughts:
Zorin is a fantastic distro and I think many Windows converts will feel at home using it when first making the transition to Linux.