Blackboard - No Linux for Online Education

In addition to being a Linux Advocate and working 40+ hours a week I am also a full time student. Due to schedule constraints I often take classes online at Governors State University. To manage their online classes GSU uses a system called Blackboard. If you've stopped by my blog here before you probably know that I run various forms of Linux on all of my personal computers. In addition to this I am almost always using a bleeding edge browser build. It was the bleeding edge part that made me assume when I saw this message: 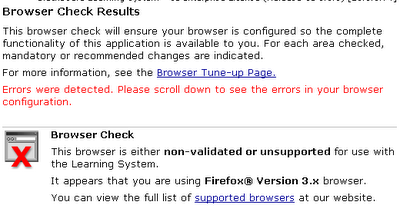 That is just didn't like the latest Firefox I had installed. For an entire trimester I just clicked past this Window (the website itself worked perfectly fine in my bleeding edge Firefox). Earlier this week however I was curious as to just want browsers were "supported" by the Blackboard system. It was then that I discovered what they really meant by "supported browsers" was "supported operating systems and browsers". 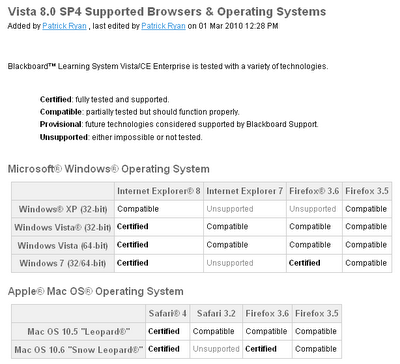 That is right - not a lick of Linux support (or even listed compatibility) in sight. 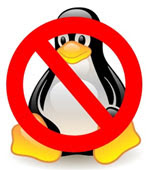 Nevermind the fact that Linux with the Firefox browser works fine for accessing the webpage - they just refuse to test it (or if they have tested it they refuse to list it as working). Now, for someone such as myself this isn't really a big deal. I see a message such as this one, shrug my shoulders, and see if it works anyways (which it does in this case).

My problem with things such as this is that what if one of the many people I have installed Linux for visit a webpage such as this one? Most people are easily intimidated by messages such as this and more than a few would not even try to log in after seeing their "browser" is "not supported". I am really hoping messages such as these will become less and less frequent as Linux gains more desktop adoption and operating systems such as MeeGo and ChromOS become pre-installed on more netbooks.

Oh, if you would like a bit of irony - when you search the keyword "linux" on the blackboard website you can find instructions for setting up the service on a Linux server... Anyone else know of any other websites the cry "no Linux", but work fine with the penguin anyways?

~Jeff Hoogland
Posted by Unknown at 8:44 AM