A New Cycle in the Vinyard - Bordeaux, Crossover, and Wine 1.2

July 16th, 2010 marks the next release in the "stable" line of Wine releases. Periodic "stable" releases of Wine are important because they are heavily tested to ensure that no regressions have occurred (meaning software that was working, will continue to work) between versions. It has been over two years since we saw Wine 1.0 stable released (which feels like a life time in Linux years - I mean comon that's a whole Ubuntu LTS release ago). This new release brings with it over 3,000 various bug fixes, as well as added support for 64bit applications. For a complete change log check here.

New stable releases of Wine are so important that my two favorite commerical Wine products, Bordeaux and Crossover, have both jumped right in Wine 1.2's new stably goodness with soon to be release product updates.

In addition to all the improvements Wine 1.2 brings to the table Crossover's 9.1 release also includes fixes that allow Star Trek:Bridge Commander and Modern Warfare 2 to function properly again. Their change log also notes "Made several application profile tune-ups" so hopefully your favorite games will perform a bit better under this Crossover release than they did with older versions.

The soon to be released Bordeaux 2.0.6 release sports a few very important updates in addition to Wine 1.2 - these include:
Beyond all of these Bordeaux is also the first Wine binary package to add support for the ever more popular Pulse Audio (default sound server in Ubuntu for some time now): 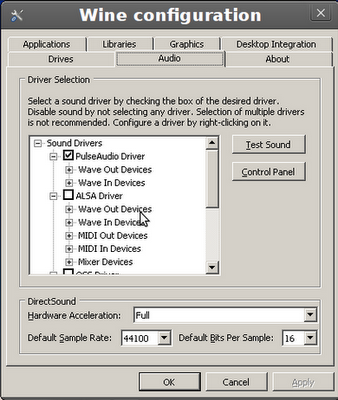 Also worth mentioning is that in celebration of the Wine 1.2 release Bordeaux is currently having a 50% off sale - 10$ for this product is a steal. It is well worth it for the time it can save you if you use Wine software often on your Unix systems.

~Jeff Hoogland
Posted by Unknown at 8:03 AM