Tech Support: C Drive on Your Linux Phone may be Corrupted

I know first tier tech support at most all companies simply read from a script when trying to sort out the issue a customer is having. I understand why this is, nine times out of ten one of the few items on their list will resolve the issue. That being said, a couple weeks ago I went out on a limb and purchased Joikuspot for my N900. Joikuspot is an application that is suppose to easily allow you to share your 3G connection via wifi.

Keywords there are suppose to. After I shelled out my hard earned dollars for the application, I downloaded and installed it on my N900. Once it finished I eagerly loaded it up and told it to start sharing my internet connection via wireless. Everything appeared to be working as I connected my Ubuntu laptop to the ADHOC network I had created from my N900. Much to my dismay I discovered no data would transfer over the wifi to my laptop. After confirming that my 3G connection was working I then proceeded to try the connection on four other laptops - all of which also failed to receive any connection through Joikuspot.

Ok - fine. I know software can behave differently on different devices, so I contact their tech support. After going through the normal setting checks and even reinstalling the application I finally got this response:

"You could still try to reset your phone. That has helped some of our customers.

Sometimes it may happen that a program corrupts the C: drive of your phone and then some data can be lost and some applications may not work or work only partially.

On a Symbian Series 60 based phone, two key sequences will allow to restore your phone to a cleaner state:
Normal Reset (*#7780#) : Restores ini files from rom but preserves user data (photos, 3rd party apps etc)
Deep Reset (*#7370#) : This reformats completely the C: drive. All applications and files stored on this drive will be lost and clean default files will be rewritten."

I was slightly at a loss for words. Now even though the N900 can boot a variety operating systems - a functional Symbian is not currently on this ever growing list. It was clear that the person providing the tech support had no idea what an N900 was (or what operating system it ran). Now, I still took the suggestion to heart and reflashed my N900 to factory defaults and still Joikuspot failed to work. Needless to say I am in the process of acquiring a refund for this dud of a product. 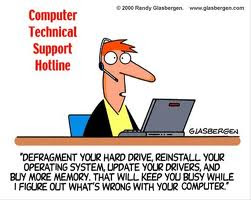 I would ask for better tier one tech support personnel, but I know this is never going to happen. My only request is that if they are going to continue to hire morons that they at least be kind enough to provide them with a better script. Anyone else ever received misinformed (or borderline moronic) tech support advice that was clearly from a poorly written script?

~Jeff Hoogland
Posted by Unknown at 9:05 AM