The Enlightenment foundation libraries (EFL) recently reached beta status after having been marked as alpha software for a decade. If you are unfamiliar with what EFL are, they can be summed up in a single quote from their front page:

"Enlightenment is not just a window manager for Linux/X11 and others, but also a whole suite of libraries to help you create beautiful user interfaces"
Enlightenment is easily my favorite Linux desktop environment and I feel it has not gotten the attention it deserves from distro developers largely due to it's long time alpha status. In fact the only Linux distributions with recent releases utilizing the Enlightenment desktop are the Slackware based Austrumi and PCLinuxOS.

Ubuntu Linux is my distro of choice for desktop usage and as such I felt it was wrong that there are no recent releases of it that come pre-configured with an Enlightenment desktop. Sure, there is MoonOS - but this is based on the no longer supported Ubuntu 9.04 - and then there is OpenGEU, which is based on the even older Ubuntu 8.10. There is also always the compiling from source option, but this is timely and something not most beginners want to attempt.

Now for the point of this post, I would like to announce the release of a pet project I have been working on for the last week:

This is an Ubuntu 10.04 based LiveDVD that is configured to have a usable Enlightenment desktop. I started off with an Ubuntu minimal CD, compiled and installed a stable build of E17 from SVN, configured the desktop to look beautiful, and then setup a default application set that should be able to accomplish the tasks of most every user.

You will notice that I use many Gnome/GTK tool sets in place of some of the default E17 ones, this is because I feel they do a better job of accomplishing their given task. I did this because while E17 is wonderfully pretty, I want the desktop to be as usable as possible. PCManFM is the default file manager, Shutter is included to take screen-shots, and parcellite is included as a light-weight clipboard manager. This release also includes non-free software such as Adobe Flash, Sun Java, multi-media codecs, and Skype (if there is an interest I will compile a version of the DVD excluding all non-free components).

The DVD is a 1.4 gb download that is currently being shared via a torrent download. You can find the 005 32bit release here. If you can spare the bandwidth please seed the torrent after downloading it.

And finally, a screen shot of what the desktop looks like: 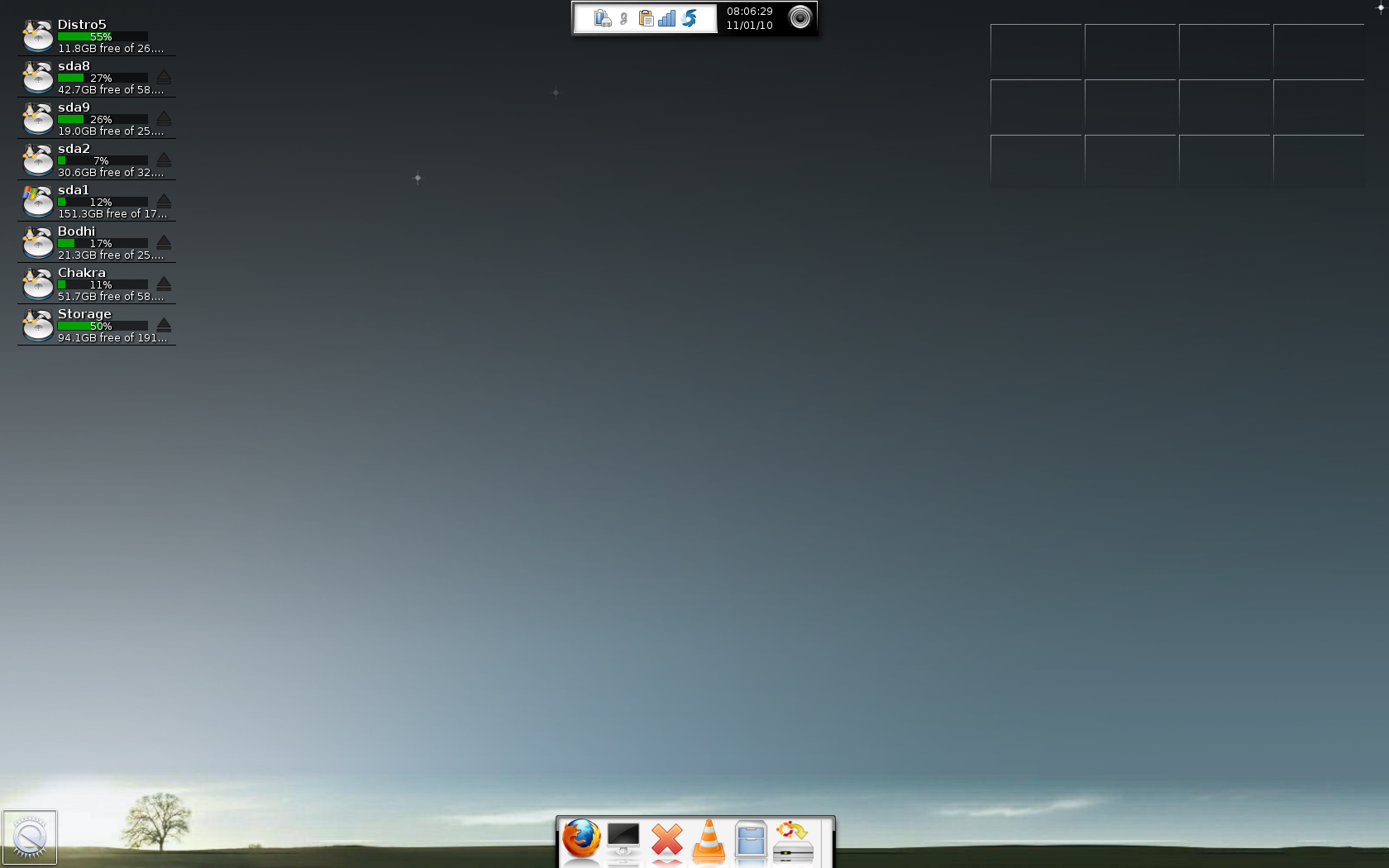 I am not done working on this disc, so changes will be made over time. I am open to suggestions for improving the over all look/feel/functionality of the live disc - so if you give it a spin please leave some feed back! Also while this is a Live DVD, it is installable. So if you like it - feel free to make it your everyday desktop operating system :)

Looking for something more minimalistic? Check out Bodhi Linux!

Cheers,
~Jeff Hoogland
Posted by Unknown at 7:57 AM