For those who aren't aware Elementary is the top level building block for the Enlightenment Foundation Libraries (EFL). The EFLs reached their first stable release almost a year ago, but aside from E17 there haven't been very many applications written using these libraries to date. Today I would like to highlight a few applications that are being developed using Python and Elementary that have reached a usable state. 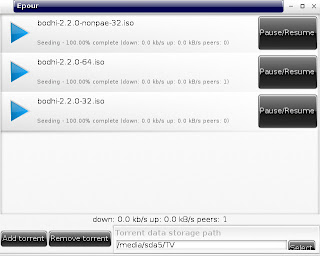 Epour uses libtorrent as a back end and currently supports all the basic features you need for a functional torrent client. You can pause/resume torrents and it resumes a partially finished torrent just fine. Epour is currently being developed by Kai Huuhko.

eCcess is intended to be a desktop neutral GUI for managing various system tasks. It is still very much a work in progress, but currently it allows you to:


There is a small screenshot gallery here. I am currently the driving force behind eCcess and I am very much open to ideas for what features it should include in the future. 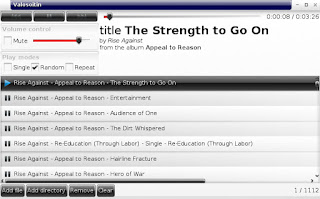 Valosoitin is a audio player with a very simple playlist interface. Supports all audio formats supported by either Xine or GStreamer. Valosoitin is also being developed by Kai Huuhko.

I already mentioned eAndora a couple of weeks ago, but I figured as long as I was talking about Elementary applications I would bring it up again. Since my first post it has gained a few new features. It now remembers the last station you had playing when you close/relaunch the program and you can now "like" and "ban" songs from your stations. I also improved some back end things so the application is more stable and times out far less with extended play.

If you are currently a Bodhi Linux user all of the above applications are just an apt-get away. If you are using a different operating system just make sure you have the latest EFLs installed along with their Python Bindings and then check out the source code from the links I provided above.

Working with these libraries myself has been a lot of fun. I hope in the future we will see more application development using Elementary as it is a very powerful/flexible library.

Cheers,
~Jeff Hoogland
Posted by Unknown at 11:26 AM